Last month, I covered how to make cold brew in the CoffeeSock– a revolutionary product that’s changing the way we brew coffee at home. It’s so easy to use, even novices (like me!) can do it!

While researching for the previous “how to” post, I discovered that CoffeeSock is based in Austin, Texas. What a coincidence- so are we! I thought it would be nice to take the opportunity to get to know the people behind the product, if at all possible. Happily, when I reached out, one of the founders of CoffeeSock, Corina Guillory, was gracious enough to meet with me.

I had the pleasure of speaking with Corina last Friday morning in CoffeeSock’s warehouse office space in the middle of bustling south central Austin. After making me a splendid cup of coffee and giving me a tour of the space, she and I sat down to chat. 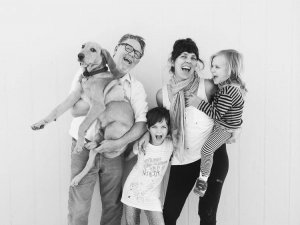 Corina with her husband, Robert, and their two children.

CH: Let’s start at the beginning. How did you come up with the idea for the CoffeeSock?

CG: In 2004, while backpacking in Central America, my husband, Robert, and I bought a Chorreador filter without the wooden base normally sold with it; this was a fortuitous moment- only we didn’t know it yet. In 2011, while traveling in La Fortuna, Costa Rica, we realized we had run out of filters for our Chemex. We tried looking for some, but the only option we found was a wooden base for the Chorreador filter; we were backpacking though, so that wasn’t really a practical option. Later, back at home and still without filters for our Chemex, it wasn’t until we had the idea to mix the two contraptions together that the idea for CoffeeSock was born. We used the Chorreador filter in the Chemex and it worked! We knew we had something potentially big on our hands…

CH: Where did you start selling CoffeeSock?

CG: I was a seamstress before, so I was familiar with the selling process of Etsy. We started selling CoffeeSock on the site and received an enthusiastic reception. From there we invented “socks” that spanned across several brewing methods like pour-over, travel filters, and Hario. I then went around town with a little traveling suitcase, pitching CoffeeSock to businesses all across Austin. Soon we were in stores like in.gredients and BookPeople Cafe.

CH: Wow, that’s huge! Is that when CoffeeSock started to take off?

CG: It helped! But it wasn’t until we partnered with Cuppow and Whole Foods that CoffeeSock really took off. Both were great learning experiences as well as successful business ventures for us: Whole Foods helped us finesse our brand and packaging while Cuppow was our first go at wide-scale distribution.

CH: That’s fantastic! Speaking of successful business ventures, what has been your favorite moment- or moments- as a successful entrepreneur?

CG: I think I relive my favorite moment daily. Whenever I look at our building, I am reminded of all that we have achieved. We grew a business organically- we did that. And we have this place that proves that we did it. Seeing this space everyday helps affirm that every struggle and sacrifice has all been worth it. We’ve come a long way from working in the shed that my husband built in our backyard! (laughs)

CH: Were you always a coffee lover? Why was it important for you to invent CoffeeSock?

CG: Ever since I was 17, it’s been a dream of mine to open a coffee shop- I’ve always been passionate about coffee. For years I just had this feeling that I was on the brink of success- CoffeeSock is what pushed me over the edge. I only needed the tools to get there. I was a self-taught freelance seamstress for a while, making baby clothes and dresses to sell on Etsy; I realize now, looking back, that that experience was just preparing me for what was to come since sewing is a huge part of making CoffeeSocks. In a way, CoffeeSock kind of found me!

CH: One of the greatest things about the CoffeeSock is its versatility. What are some different ways to use the Sock?

CG: There’s a CoffeeSock for every coffee brewing method and beyond. We have commercial sized options for office parties and events and the Sock can also be used to brew tea, nut milks, kombucha- even beer!

CH: Beer?! That’s wild! How about you- do you have a favorite way to use the CoffeeSock?

CG: Let’s see….I like adding spices such as vanilla bean and cinnamon to cold brew- it’s a really tasty easy way to add depth and flavor to your coffee. I also love Chai tea, so I have made a habit out of adding cardamom, vanilla powder, star anise, and clove to my coffee- I recommend it! Whiskey and cold brew make a good combination as well.

CH: These sound like great drinks for the new Fall season. I can’t wait to try them myself! One last question….any new products coming out?

CG: Right now we are focusing on re-designing our packaging. We do have a polisher coming out that acts kind of like an “ultra filter” for your coffee. It will provide an extra layer of protection against unwanted particles getting into your coffee.

CH: Corina, thank you so much for taking time out of your busy schedule to talk with me. I’m sure we’ll be seeing more of you and CoffeeSock in the future!

CG: Thank you for thinking of us!

And with that, Corina helped me to my car with an armful of products that will give me an everlasting supply of cold brew. For that, this household thanks her!

What Are You Waiting For? Get Yours!

Head over to CoffeeSock’s website to get one (or more) of your own today!