We’ve all heard the common coffee health myths, coffee will stunt your growth, coffee will sober you up, coffee will give you insomnia – well I wouldn’t lose any sleep over these fables.  For some reason, people have been trying to give coffee a bad rap.  Unfortunately for them, and fortunately for us coffee lovers, the USDA’s 5-year scientific report recently set the record straight: Moderate consumption of coffee is not associated with increased risk of developing any long-term health problems.  To sum up their report, here are a few of our favorite benefits you might enjoy with your morning coffee.  This is Your Coffee and Health, Our Top 3 Favorite Benefits.

French Press Can Protect Your Pump

Researchers at Harvard wanted to evaluate the link between coffee consumption and heart health.  After examining the diets of over 100,000 adults who were followed since the 1970’s, the researchers concluded that there is a significant inverse correlation between increased coffee consumption and death from cardiovascular disease – that includes things like stroke, heart attack, and arrhythmias.

What does this all mean?  The more coffee you drink, the less likely you may be to die from one of these unfortunate diagnoses.   So drink up!  That cup of java might lower your risk of dying from heart disease.

Type II diabetes (or as your aunt Thelma calls it – the sugars) is reaching epidemic levels as the American Diabetes Association estimates about 30 million Americans are living with the disease.   But along with diet and exercise, coffee might be your secret weapon to staving off high blood sugar.  Multiple studies have found associations between increased coffee consumption and a decreased risk of developing diabetes.  We think it may have something to do with coffee’s ability to make our cells more sensitive to insulin, the hormone that tells our cells to take up sugar after a meal so we can use it for energy later.

Keep Your Brain Sharper Than Cheese…

Several studies have established the likely association between coffee drinking and a decreased risk of developing dementia which is why the USDA included caffeine’s neuroprotective effect in their scientific statement.  We think that it has something to do with toxic molecules called Beta Amyloid – they can build up in the brain and are linked to the development of some forms of dementia like Alzheimer’s disease.  But coffee might be beta amyloid’s weakness.  Studies have found that caffeine given to mice at concentrations similar to what we get from drinking coffee may reduce the amount of beta amyloid in those cheese eaters’ craniums.  Coffee might help our brains in a similar way and hopefully future studies will show just that.  In the meantime, enjoy your morning cup while you crush that crossword puzzle! 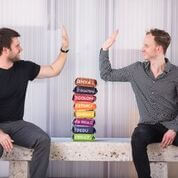 I can tell you’re excited!  Before you start going crazy on cappuccino keep in mind that caffeine consumption greater than 400 mg is not advised by the USDA.  The data on coffee intake much higher than that is limited and more studies are needed to say whether or not to have more than about 5 cups.  So to optimize your health benefits from coffee, be sure to not overdo it.

Now, when we suggest drinking 3-5 cups of coffee, we mean just that. Don’t go filling your cup with creamer and sweeteners because that adds extra calories in the form of sugar and fat that your body doesn’t need.

Stick to coffee in its purest form – jet black – and you might be on your way to better health.  And since coffee is good for you, why not treat yourself to a monthly coffee subscription?  The better quality coffee you drink the less you’ll feel the need to add milk, cream, and or sugar.