The world of coffee is endlessly fascinating, and today we’re exploring a crucial element in that world: how we brew coffee.

Sometimes it feels like every coffee drinker out there swears up and down that they know the best way to brew a great cup of joe. From your Grandpa who’s been using his lucky Mr.Coffee machine since 1975 to that barista with the fancy mustache who makes cold brews with a mortar and pestle… there are countless techniques out there, some familiar, and some, not so much (looking at you sock method).

Journey with us through coffee history to learn how some of our favorite coffee brewing techniques came to exist in the first place… is the French Press is technically Italian? Which piece of brew gear earned a spot at MoMA?

For a fun way to dive deeper with your morning cup, read on to learn the fascinating history behind some of your favorite brew methods, and why roast level is key when selecting your method of choice…

Immersion vs Pour Over

First, a quick framework to help us understand how and why we brew the way we brew. As many styles as there are, most are either Immersion or Pour Over techniques.

The foundations of both these ideas are fairly straightforward. An Immersion method involves immersing coffee grounds in water throughout the process to extract flavor over time. Pour Over methods focus on slowly introducing water to grounds, allowing gravity to fuel extraction.

What’s important to note is the difference in taste these 2 different approaches provide. Coffees made with Immersion techniques are characterized by bold finishes, and bigger bodies; while Pour Overs tend to accentuate the complexities and more delicate characteristics of a coffee. 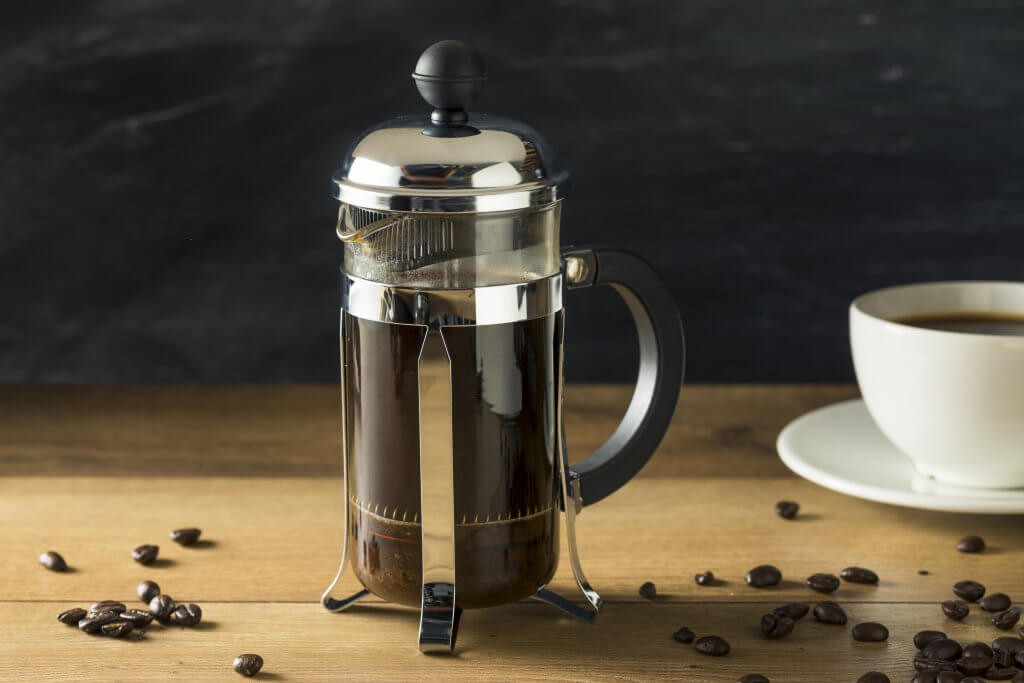 The question of the original home of the French Press is a mystery shrouded in drama and intrigue.

According to legend, the French Press was actually invented by French and Italian travelers. The story goes that in the 1840s a traveling Frenchman was boiling water on the road for his morning coffee when he realized he hadn’t put in the grounds. He tossed them in after the water was boiling and, naturally, the grounds rose to the top.

Hoping to reuse his only coffee, the Frenchman bought a metal screen from a fellow traveling Italian merchant. With the merchant’s help, they used the metal screen to press down on the grounds, separating the coffee from the mud, and quickly realized they had produced a surprisingly delicious brew. The unlikely pair had stumbled upon a new immersion method that would go on to become one of the most recognizable coffee carafes in the world.

The French Press as an idea was first introduced to the public in 1852 by the French inventors Mayer and Delforge. Their bulky metal contraption did involve a plunger straining grounds through hot water, but was completely unrecognizable from any French Press we’d find today. It wasn’t until 1928 that Italians Attilio Calimani and Giulio Moneta registered the first patents of a similar, simpler design that became the first widely distributed brewing device of its kind.

Finally, the French Press we all know and love was born from the mind of Italian designer Faliero Bondanini. With its sleek glass body and satisfying steel lid, the carafe was an instant classic that has gone virtually unchanged since its inception in 1958.

Easily brew multiple cups of full-bodied coffee for a crowd. The French Press is perfect for Medium and Dark Roast drinkers who enjoy a rich, bold cup. 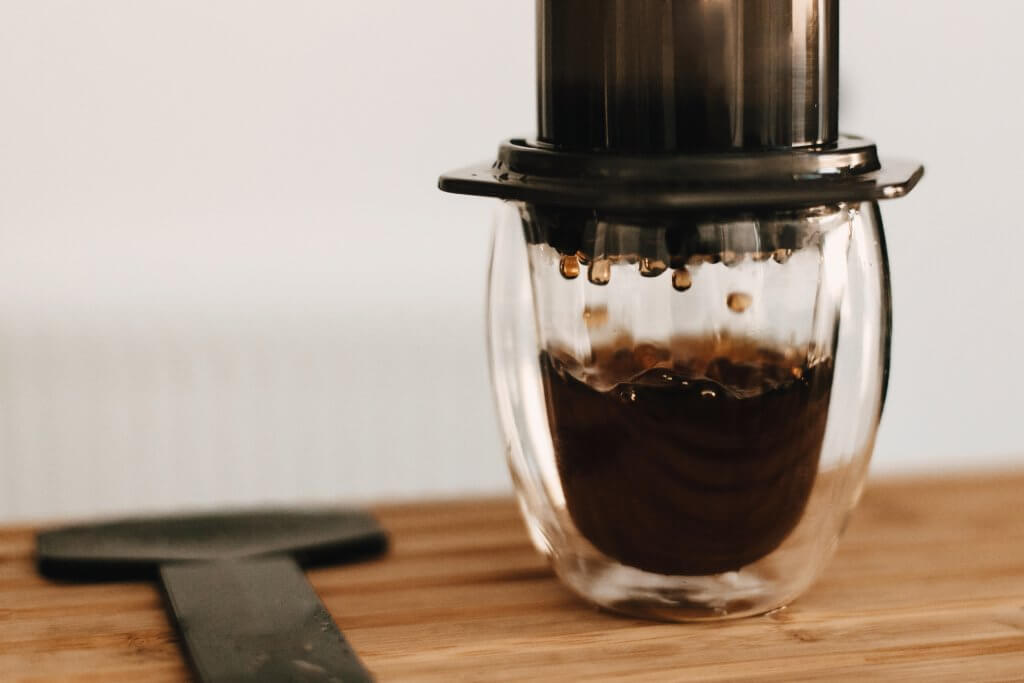 In late 2002, Alan Adler’s life was brimming with success. He had invented a new form of frisbee that was selling millions of units, he was teaching at the esteemed Stanford University, he had a loving family and as he entered his mid-seventies, everything seemed pretty perfect.

But Alan had a problem. For all of the perfection he had managed to achieve, there was still a glaring issue he had to face every morning. His coffee was a little bitter for his liking, and to make matters worse, sometimes he brewed too much with his regular drip machine. It was apparent the inventor needed to step into the lab once more. 40 drafts and a couple of years later, the Aeropress emerged.

With no clean up required and the steep time brought down to 20 seconds, the Aeropress redefined immersion brewing. While at first coffee snobs and hipsters deemed the funny looking device an overhyped kitchen gadget, no one could deny the consistently smooth taste the Aeropress provides.

Today, the Aeropress’s popularity is still growing exponentially, and the third wave brewing community has taken to the method so strongly. There is now an annual competition boasting thousands of attendees dedicated solely to making exceptional coffee with the Aeropress. As for Alan, the legend can now rest on his laurels and finally sleep well, knowing his perfect cup of coffee will be there waiting in the morning.

A simple, efficient way to brew your morning fuel, the Aeropress is versatile enough to produce exceptional results with any roast level! Bonus – you can brew an extra concentrated cup for an almost-espresso shot without a fancy machine. 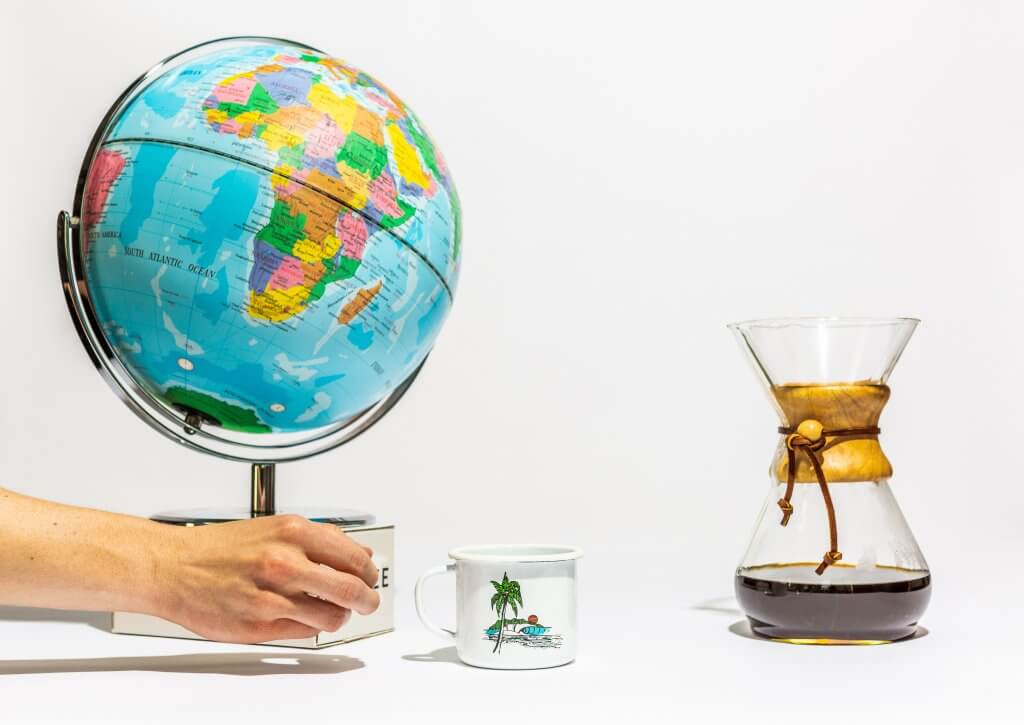 The Chemex may look like the sleek, new, brewing method of the future, but the glass carafe can actually trace its roots all the way back to 1941. German chemist Dr. Peter Schlumbohm was a scientific and creative genius. By the end of his life, he had over 3000 patents to his name and had invented everything from automobile parts to a cutting edge system of refrigeration. It was this system of refrigeration that actually helped the Chemex see the light of day.

In 1939, Dr. Schlumbohm had finally found an investor interested in his passion project: a new, cheaper system of refrigeration that he was sure would revolutionize the American kitchen. The only problem was this new investor demanded a controlling share of Peter’s potential company.

Prioritizing independence over easy money, the scientist decided to maintain control of his creation, and drum up funds for his project by selling a cheaper, more niche device he had been working on: the Chemex.

With its elegant, Bauhaus influenced design and ease of use, the Chemex was an immediate success. An artistic feat as much as a scientific triumph, the Chemex has permanent installations in the Museum of Modern Art in New York, the Smithsonian, the Corning Museum of Glass, and the Philadelphia Museum. Plenty of brewing methods can make a great cup of coffee, but few do it with as much style as the Chemex.

Fun fact – in From Russia With Love, Ian Fleming’s James Bond preferred brewing method was revealed to be the Chemex

With its eye-catching design and large carafe, this is the ultimate brewing method for hosting. The Chemex is perfect for showcasing the unique characteristics of specialty coffee, particularly with lighter roasts – from subtle tasting notes to light acidity. Be warned, this is one of the most finicky brew methods, but the results are worth the extra effort!

In the 1980s, Immersion brewing methods had completely “immersed” themselves in the world of coffee. At the time, there was not a single popular pour-over method readily available on a large scale. Who could solve such an injustice though? As it turns out, the modern champion of the pour-over method started as a glass company in Japan: Hario.

Starting with the simple idea that the parabola is the most effective shape for pour-over brewing, Hario took some math, a dream, and a whole lot of super heat resistant glass, and designed what is still the most popular pour-over device to date. Now available in a wide array of colors and sizes, the V60 is a triumph of engineering, and a hero to pour over fans worldwide.

The perfect no-fuss method for pour-over brewing for both beginners and at-home baristas. The complex compositions of Light Roasts are especially highlighted with the Hario V60

The Brew For You

Today, we have more options than ever before when selecting our favorite brewing methods. Each style has its own unique story, and whether you reach for the handy Aeropress, or the classic French Press, or the elegant Chemex… the right roast is truly the key component in any quality brew.

There are so many factors to consider when selecting a roast level. What brew method are you using? Do you prefer adding milk and / or sweetener? Most importantly: what do you enjoy most in quality coffee?

Atlas Coffee Club tailors roast preferences to your individual needs, based on how you enjoy coffee and how you brew Matched with the perfect roast, coffee from around the world pairs flawlessly with any brew method!