With borders on both the Pacific and Caribbean oceans, Nicaragua is home to some of the world’s oldest and best preserved cities. The Central American country boasts a rich cultural history, amazing landscapes, and a relationship with coffee that dates back to the mid 1800s.

You’ve visited some pretty epic volcanoes on your adventures (like that one time you climbed Mount Batur in Indonesia), so you were definitely interested to hear about Apoyo Lagoon- a lagoon located in the crater of a (non-active) volcano.

As you get closer, you look out the car window to see parasailers in the sky and start to get excited. You read all about the abundance of activities to do here and have actually booked yourself a parasailing tour later on that day- after you’ve had some time to get your relaxation on.

You soon forget all your anxiety about parasailing when you reach the lagoon. Only in movies did you think somewhere this beautiful existed.

You claim one of the benches overlooking the lake and settle in for a while to catch some rays and marvel at the scenery. Apoyo Lagoon is a rich and vibrant ecosystem that is home to several different species, including some that are endemic to the area. The lagoon and its surrounding forests are considered a dry tropical climate which allows rare species of trees and plants to flourish like black rosewood, marmalade plum, and guacuco.

Your alarm goes off to remind you that your parasailing tour is imminent. You shut it off and take a deep breath as you rise off the bench. As you start walking, you remember how nervous you were before you went scuba diving off the coast of Port Moresby, but how happy you were that you did it. You’re sure it’ll be the same with parasailing… 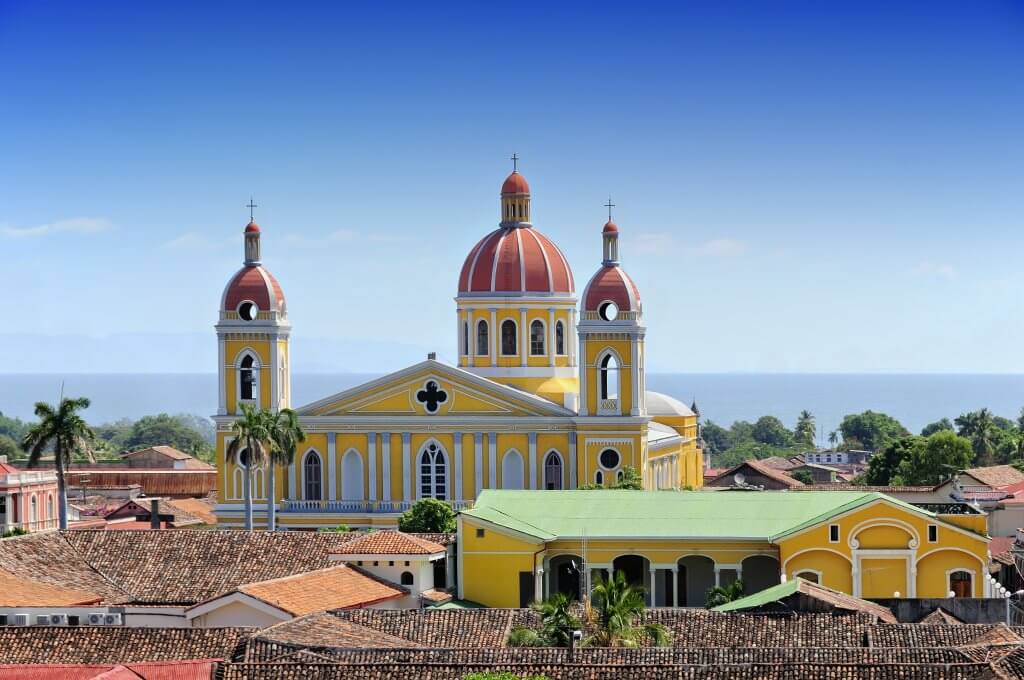 Having survived your parasailing adventure, you head to Granada- a city not far from Apoyo Lagoon. Named by Yucatán conquistador Francisco Hernández de Córdoba, Granada is one of the oldest and best preserved cities in the world. It is where you’ll be calling home for a couple days.

After checking in to your hotel, you grab multiple pamphlets of attractions and activities that catch your eye in the lobby before heading out to explore on your own. You thought about booking a tour, but discovering things on your own sometimes can be even more fun. You really just want to see the many colorful examples of Spanish Colonial architecture.

You spend the entire day in Granada wandering the streets, meandering in and out of shops picking up souvenirs for yourself and loved ones. You end your self-guided tour at a restaurant where you nosh on staple Nicaraguan dishes like gallo pinto (a rice and beans dish) and fried plantains.

The next activity on the itinerary takes you to Lake Nicaragua where you will be taking a kayaking tour.

You go to the specified place in Granada and check in for your tour. After a few others arrive, all of you are transported to Cabaña Amarilla where you will officially start your tour. Your guide is waiting for you at the docks and, after helping get all of you situated in your kayaks, you’re off!

It is a casual tour, with the guide spouting some interesting facts about the area now and again- like that Lake Nicaragua is the largest lake in Central America and that the Spanish called this lake “Mar Dulce”, which means “sweet sea”- but largely allowing you and your group to marvel at the scenery and ask questions if you see something that interests you.

You and your group meander in and out of some of the islets (there are approximately 365 of them, so you don’t visit them all), eventually landing at your final destination: a hotel where you receive a much needed refreshment.

Nicaragua comes in just shy of the top 10 coffee producers of the world, coming in at #12. Coffee in this region is grown, harvested, and produced economically, with great care given to preserve Nicaragua’s lush forestland. Originally, coffee was planted on Nicaragua’s Pacific coast, but today production hails mostly from 3 Central Nicaraguan regions: the Segovias (which yields light floral coffee with high acidity), Matagalpa, and Jinotega. These regions are prime for growing coffee because of their rich volcanic soil, humid tropical climate, and lush vegetation which imbue the coffee plants with more nutrients. Over 45,000 coffee farmers and their families in Nicaragua depend on this caffeinated commodity to survive; these small scale farms, where family members are usually the only workers, are often completely sustainable- with farmers also growing over 50% of the food they eat themselves. This sustainability further gives Nicaraguan coffee farmers an advantage on the markets as growing their own food (like bananas, oranges, and mangos) and chopping trees to sell as firewood also gives farmers and their families more opportunities for profit by selling a variety of commodities.